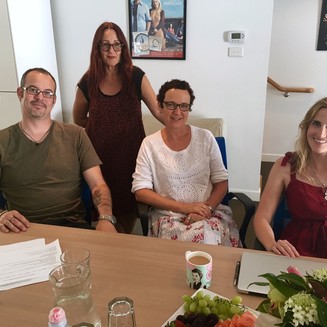 Every Cloud Productions drama series Deadlock has been given multiplatform story development funding by Screen Australia to take it to the next stage of development.

Funded as part of Screen Australia's Enterprise Stories program, and in partnership with Screenworks, Every Cloud held a Script Lab Workshop for emerging writers in Byron Bay late last year, developing the series with youth consultants from the region and Skins co-creator Bryan Elsley as consultant and mentor.

VCA graduate Billie Pleffer was selected as one of six emerging writers to participate in the workshop, and is now working with Every Cloud’s own Deb Cox and Mike Jones, to bring the series to script stage. Completing a story-plotting workshop with the Every Cloud team and story editor Mike Jones back in February, Billie is now creating short form scripts to complete the first season of the series, which is being pitched for online distribution.

Billie is an award winning writer/director, with her graduate short film B I N O, premiering at the Berlin International Film Festival in 2012, winning two major prizes; Best Short Film by the International Jury and Special Mention by the Children's Jury. Her most recent short film, BABY BABY, was funded by the prestigious Screen NSW Emerging Filmmaker Fund, and had it's Australian premiere at the Melbourne International Film Festival, while it also won the 2014 Australian Writer's Guild Award (AWGIE) for Best Short Film.

Billie is in post production on her latest short FISH funded by the highly competitive Screen Australia Hot Shots Fund, and was also recently shortlisted for the Lexus Australian Short Film Fellowship, with the four successful candidates being announced in June at the Sydney Film Festival and receiving a fellowship grant worth $50,000.

More Deadlock news will be announced next week. To get updates on Deadlock sign up to our newsletter.