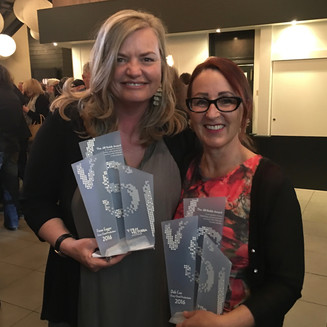 Victoria’s screen sector gathered last night to celebrate and acknowledge the achievements of five industry leaders who have helped to build Victoria’s reputation as the creative state at the 2016 Screen Leader Award.

The recipients included Every Cloud Productions’ company directors Deb Cox and Fiona Eagger who were honoured to receive the Jill Robb Award for Outstanding Leadership, Achievement and Service to the Victorian Screen Industry. Every Cloud’s dynamic duo, have built a reputation for creating nationally and internationally successful programs. The major award recognises a Victorian female screen practitioner who has shown leadership through their achievements and involvement in the industry.

Fiona Eagger, Company Director, Every Cloud Productions.
“Film Victoria! I feel so fortunate to have had a fantastic, accessible state organisation supporting me throughout my career. Doing period drama like Miss Fisher’s Murder Mysteries, you couldn’t make it anywhere else other than Melbourne, Victoria.  The incredible architecture can’t be replicated and we have fantastic access to locations. I’m thrilled that we are also in production in Victoria on our new series Newton’s Law, starring Claudia Karvan and Toby Schmidt, and we have a huge slate in development, including the series Seven Little Australians, Deadlock and a Miss Fisher’s Murder Mysteries feature film."

Deb Cox, Company Director, Every Cloud Productions.
"I’m so delighted that Fiona and I have won this award as Every Cloud Productions. It’s lovely to have industry recognition for what we do, particularly with regard to leading the way and doing what we can to support other women. We work in a very cohesive screen community and Film Victoria has always been incredibly approachable and supportive. They look for ways to help rather than creating hurdles, and acknowledge that we all have limited resources"

Independently, Fiona and Deb have produced and created close to 100 hours of prime time drama, including seminal drama series SeaChange, telemovie The Society Murders, family drama East of Everything, acclaimed Indigenous drama The Gods of Wheat Street and international hit series Miss Fisher’s Murder Mysteries.  Legal drama series Newton’s Law is the latest project from Every Cloud, due for release in early 2017 on ABC.