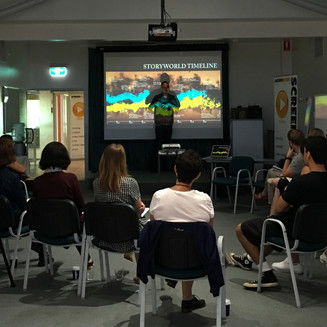 Original article from IF Magazine by Brian Karlovsky-  if.com.au

Skins creator and co-writer Brian Elsley has given a ringing endorsement of six young Australian writers after working with them to develop new youth drama Deadlock in a Byron Bay script lab.

The UK writer signed on for the project after he was approached by Every Cloud Productions’ executive producers, Deb Cox and Fiona Eagger, who were keen to use some of Elsley’s innovative techniques following the international success of controversial teen series Skins.

Elsley told IF he was surprised by the depth of talent. “Deb and Fiona approached me because I had used that technique of bringing young teenagers into the process right at the beginning,” he said.

They were joined by multi-platform writer Mike Jones, local Indigenous writer Jon Bell and YouTube stars Danny and Michael Philippou, creators of the Racka Racka channel. Elsley said he thought the approach to the project was strong from the outset.

“It consisted of some very collaborative approaches among the writers and we brought in a number of teenagers from the Byron Bay area and they were completely integrated into the writers’ work,” he said.