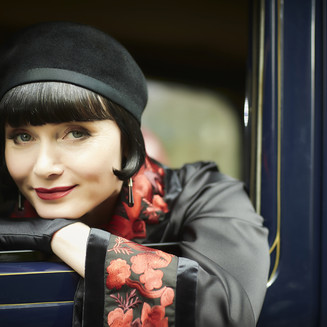 Miss Fisher’s Murder Mysteries fans across the globe have pledged a record-breaking amount of funds to support getting the feature film “Miss Fisher and the Crypt of Tears” into production.

6000 fans from 32 countries have pushed the crowdfunding campaign across the $600,000 mark. The original target for the campaign was set at $250,000 and was achieved in less than 48 hours from when the campaign went live on the 15th September 2017.

The campaign’s success is reminiscent of the wildly successful crowdfunding campaign for another well-known female detective, Veronica Mars back in 2013. Fans from the USA have been the greatest (by volume) supporters of campaign with 50% of the pledges originating from the US.

“We have been blown away with how the USA has embraced the character of Phryne and their support bodes well to us getting a US distributor interested in the film”, said Fiona Eagger, CEO and Co Founder of Every Cloud Productions.

Backers have pledged their support from all corners of the world in support of the Australian drama series (shown in 220 territories worldwide) and have come from countries such as Sweden, Netherlands, France, Italy, Denmark, Canada and Germany.

Deb Cox, Co-Founder and Creative Director, Every Cloud Productions said, “The success of the campaign has been incredible, not only in terms of financial support but it has highlighted how much our show means to so many people across the world. The thousands of personal stories that have been shared through the campaigns community forums and message boards have been so inspiring. ”

Below is sample of the fan support the production company has received during the course of the campaign;

“This movie needs to happen because it is important. Important not because “it’s nice” or “I like it” but because it brings these powerful, strong women to life.” @earanie

“As women, we have a long history of having to fight for the things we believe in, whether it’s the right to vote, equal opportunity, or the kind of entertainment that’s worth our rare and precious free time.” @phrynephile

With eight days to go the producers are urging the global fan base to keep pushing and sharing news of the campaign to see how far they can go. The campaign has just released a new $700,000 stretch goal and have added new reward tiers such as fan access to cast script read throughs.

About Miss Fisher and the Crypt of Tears.

Miss Fisher and the Crypt of Tears will be a stand alone theatrical release and promises audiences exotic locations, sumptuous interiors and glamorous costumes as the world leaps from the small screen to the big screen. The film expects to film in locations around the world with international locations including Morocco, Israel, and London under consideration.

Miss Fisher and the Crypt of Tears will be Executive Produced by Fiona Eagger and Deb Cox from Every Cloud Productions, written by Deb Cox and Directed by Tony Tilse (Farscape, Serangoon Rd) and will see the return of the fabulous Essie Davis as Phryne Fisher and Nathan Page as Detective Jack Robinson as well as other regular characters that are adored across the world.

The feature is expected to commence filming Autumn 2018.