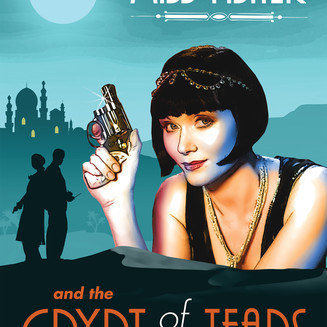 For fans, the long awaited next instalment of Miss Fisher Murder Mysteries has come a step closer today as Every Cloud Productions, the Producers of the international smash hit series launched the Australian film industries most ambitious Kickstarter™ campaign to help bring Miss Fisher and her crime fighting cohort back…this time on the big screen.

Miss Fisher & the Crypt of Tears will deliver the usual delights to Miss Fishers devoted global fan base and build on her cult international following as she escapes the small screen and launches herself on the unsuspecting world, discovering missing treasure, solving numerous murders and breaking all aviation records.

Fiona Eagger, Every Cloud Productions CEO said, "We want it to be like the Indiana Jones movies, we might not have Steven Spielberg's budget but that is what she (Phryne Fisher) is - an action hero, equal parts Indiana Jones and Wonder women. Phryne has got to be able to fly the world beyond the shores of Australia to cement her position as a bona fide International action hero”.

Miss Fisher & the Crypt of Tears will be a stand alone theatrical release and promises audiences exotic locations, sumptuous interiors and glamorous costumes as the world leaps from the small screen to the big screen. The film expects to film in locations around the world with international locations including Morocco, Israel, and London are under consideration.

Eagger added, “Our ambitious global canvas for Miss Fisher & the Crypt of Tears will not come cheaply but we are excited about the prospect of exploring exotic locations”

With news of the feature script reaching over 1 million people across the company’s social platforms, Deb Cox, Every Cloud’s Creative Director, is confident the campaign will be embraced, “Our fans are as passionate about seeing this film made as we are and it would be fitting – and wonderful – if their support helps us get there.”

The Miss Fisher & the Crypt of Tears crowdfunding campaign has been developed in response to thousands of fans urging Every Cloud Productions to launch a campaign.

Rewards for all backers have been curated and focus on special experiential packages and exclusive behind the scenes access during the film's development. For a lucky few, some backers will even get the opportunity to see themselves on the silver screen as extra’s or be able to own a costume piece worn by Miss Fisher star Essie Davis in the film.

Miss Fisher & the Crypt of Tears will be Executive Produced by Fiona Eagger and Deb Cox from Every Cloud Productions, written by Deb Cox and Directed by Tony Tilse (Farscape, Serangoon Rd) and will see the return of the fabulous Essie Davis as Phryne Fisher and Nathan Page as Detective Jack Robinson as well as other regular characters that are adored across the world.

The feature is expected to commence filming Autumn 2018.