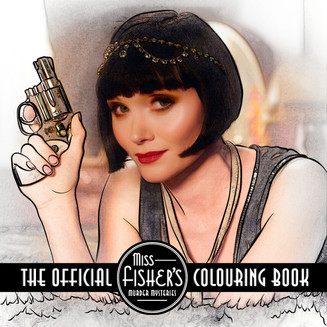 Put your creativity and imagination to the test with the official Miss Fisher colouring book featuring over fifty illustrations from the hit television series, Miss Fisher’s Murder Mysteries. The book contains illustrations of key characters and scenes from the series, as fans are encouraged to add colour to costumes, interiors and locations - illuminating their take on the fascinating world of Miss Fisher.

With devious weapons of murder hidden within the illustrated pages of this book, fans will have to hunt them down as they colour-in, along with the episodes they relate to.

The book has been developed and self-published by the team at Every Cloud Productions, with illustrations and design by Jacqueline Donnelly based on iconic images from the series. The book is being sold exclusively online via our shop, with international shipping available, at www.everycloudonlineshop.com

So far 3 seasons of Miss Fisher’s Murder Mysteries have been produced comprising of 34 episodes. It has been sold to over 160 territories internationally and was a top rating series in Australia.

Jacqueline Donnelly – Illustrator & Designer
Jacqueline Donnelly is a USA born graphic artist and designer. After she graduated with a BFA from SCAD in Savannah, Georgia she had a need to see the world. Along her journey, she was charmed by a fellow traveling Irishman then found herself moving to Australia with him and has been there ever since. Jacqueline has had the privilege to work on many exciting television productions and design projects during her time in Melbourne. One most memorable and dear to her though, was her rst ever graphic artist role for Miss Fisher’s Murder Mysteries, Series 1 and is grateful for the opportunity to stay in this magical world a little bit longer in the creation of this colouring book.