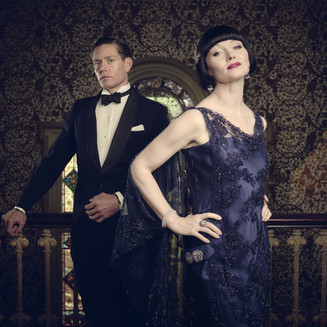 Miss Fisher is back on ABC TV in May. The 8 part crime drama series from Every Cloud Productions will premier on ABC at 8:30pm Friday 8th May, with the final episode screening on the 26th June.

The third Series of Miss Fisher’s Murder Mysteries continues the unconventional antics of stylish lady detective, the Honourable Miss Phryne Fisher, as she solves crimes with the help of her ensemble of household cohorts and continues her playful partnership with the suave and dedicated, Detective Jack Robinson.

Phryne’s estranged father, Baron Henry George Fisher, arrives unannounced in Australia after selling up the family estate in England and does his best to ingratiate himself with Dot, Bert, Cec and Mr Butler, though his roguish charm is lost on his own daughter. When Phryne recalls a secret encounter she witnessed during the War, between her father and an angry visitor, she begins to suspect that the cousin the Fishers inherited their title from is still alive and could be out to exact his revenge.