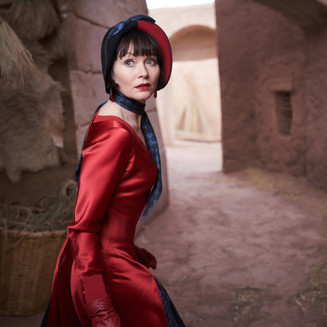 MISS FISHER & THE CRYPT OF TEARS GETS NORTH AMERICAN RELEASE

Every Cloud Productions’ Miss Fisher & the Crypt of Tears will get a cinema release in the US before premiering on the streaming service Acorn TV.

The SVOD platform also acquired the four Ms Fisher’s Modern Murder Mysteries telepics, which launch on the Seven Network at 8.30 pm on February 21.

Acorn TV, which is home to the Miss Fisher series, bought the film sight unseen from the distributor All3Media International and will book US cinemas after the Australian distributor Roadshow sets its release date. It is the first deal for the movie, which is yet to be screened for international buyers.

“It’s a perfect marriage,” Fiona Eagger, who produced the film with Deb Cox, tells IF. “Acorn TV were very keen to buy the film and release it theatrically. They know how to reach the Miss Fisher audience. It’s great to keep the theatrical rights in-house at Acorn."

The Acorn deal will mean that the Miss Fisher & the Crypt of Tears will be released in selected cinemas in North America before becoming available on the Acorn streaming service. This is a popular and successful strategy for many independent films in the US market. More details surrounding the US Theatrical release will be announced when information becomes available.

The film will have its premiere release in Australia with Roadshow Films, and be released in North America in selected theatres by Acorn. Further territories around the world are yet to be confirmed but we will be announcing more details as they come to hand. Stay tuned!

Based on the Phryne Fisher Mystery Books by Kerry Greenwood.
Miss Fisher & the Crypt of Tears is an Every Cloud Productions feature for Roadshow Films, Australia, with principal production investment from Screen Australia, in association with all3media international, Film Victoria, Fulcrum Media Finance and Film Finances Australasia.