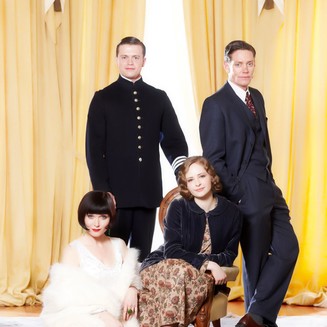 Miss Fisher & The Crypt of Tears, the feature film based on the international hit television series and best-selling murder mystery books, will begin filming in Morocco and Melbourne, Australia, in October.

The film is an Every Cloud Production, the principal investor is Screen Australia, in association with Film Victoria.  Roadshow Films is the Australian/NZ distributor.

Essie Davis (Game of Thrones) returns in the eponymous lead role as the glamorous private detective, The Hon. Phryne Fisher, whose exploits in 1920s Melbourne, Australia, lead her to murder, mystery and mayhem from London to British Palestine.

Essie will be joined by her co-stars from the series including Nathan Page as Detective Inspector Jack Robinson, Miriam Margolyes as Aunt Prudence and Ashleigh Cummings as her loyal assistant and maid Dorothy ‘Dot’ Collins.  Ashleigh will be seen in the upcoming international feature Goldfinch.

From a screenplay by Deb Cox, Miss Fisher & The Crypt of Tears will be produced by Fiona Eagger, with Every Cloud’s Eagger and Cox also acting as executive producers. Lucy Maclaren is co-producer.

The film will be directed by Tony Tilse, who was the set-up director on the television series Miss Fisher’s Murder Mysteries. Tony has built a formidable international reputation for work such as Serengoon Road and Grace (HBO Asia), Wolf Creek, multiple episodes of Ash vs Evil Dead for producer Sam Raimi and Chosen for Playmaker / China’s iQiyi.

Private investors and fans have contributed more than $AUS1 million to the budget for Miss Fisher & The Crypt of Tears through an extraordinarily successful crowd funding campaign.

Writer Deb Cox promises that “both new fans and old are in for a ride full of twists and turns as Phryne’s Middle Eastern adventures find her hunting for missing treasure, racing the clock on an apocalyptic ancient curse - and still finding time for romantic dalliance - in the sweeping deserts and sumptuous mansions of this exotic big screen production”.

The film opens with the Honourable Miss Phryne Fisher rescuing Shirin Abbas, a young Bedouin woman, who has been thrown into jail in British Mandated Palestine, for making trouble at a time of colonial unrest. After a perilous escape from Jerusalem, she rejoins Shirin as a fellow guest in the home of Lord and Lady Lofthouse, for the London ‘season’ and she pledges to help her right a wrong and discover the truth about the Crypt of Tears - an ancient crypt rumoured to lie somewhere beneath the rolling sands of the Negev Desert.

Fiona Eagger said: “Miss Fisher & the Crypt of Tears will have the witty intrigue of Indiana Jones, the opulent style of a Merchant Ivory Production, and the feminist fun of Thelma and Louise.  The legions of Miss Fisher fans from around the world have been eagerly waiting for news of Phryne’s next grand adventure.  We are thrilled that she will be taking the leap to the big screen and with this fabulous new international murder mystery story.”

Sally Caplan, Head of Production at Screen Australia, said: “The Miss Fisher TV series has had extraordinary success with international sales in over 170 territories and is testament that strong female characters resonate with audiences. Every Cloud have smartly leveraged this fan base into crowd-funding for the film, and assembled the same creative team to expertly deliver a big screen chapter of the adventures of Miss Fisher with excellent commercial prospects.”

Victorian Minister for Creative Industries Martin Foley said: “This year is shaping up to be a bumper year for Victoria’s screen sector and Miss Fisher & The Crypt of Tears is part of an impressive slate of local productions that will go on to screen across the globe. The 2018-19 Budget includes $8.4 million to ensure our state continues to be a destination of choice for productions of all sizes and secure a strong pipeline of work for the 11,500 Victorians employed across our screen industry.”

Joel Pearlman, co-CEO of Roadshow Films, said: “We are incredibly excited to be working with Fiona, Deb, Tony and this incredible team to bring Miss Fisher to the screen. Phryne Fisher has become a much loved and iconic modern day heroine in a classical world and her leap to the big screen is already anticipated by the huge audience that has grown to love this character. Roadshow films can’t wait to be part of the next iteration of her journey.”

Miss Fisher’s Murder Mysteries is one of Australia’s most successful television brands, both at home in Australia and internationally.   It has been hugely successful in North America, the UK and Australia with sales into 179 additional territories.