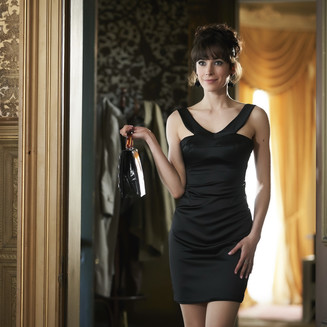 Channel Seven and Every Cloud Productions, in association with Screen Australia and Film Victoria, today announced the talented ensemble cast who will star in the brand new series Ms Fisher’s Modern Murder Mysteries - a spin-off from one of Australia’s most loved and successful television series.

Set in swinging ’60s Melbourne, Geraldine will play the gorgeously reckless Peregrine Fisher who inherits a windfall when the famous aunt she never knew, Phryne Fisher, goes missing over the highlands of New Guinea.  Peregrine sets out to become a world-class private detective in her own right with the unerring guidance of The Adventuresses’ Club, a group of exceptional women of which her celebrated aunt was a member.

A natural rule breaker, Peregrine is fearless, fun, and charmingly down-to-earth. Despite failing at a number of jobs - hairdresser, typist and sales girl – her survival instincts have kept her afloat. Armed with an impressive collection of life skills and having recently lost her dependent mother, Peregrine is perfectly poised for a new and challenging life and looking for a sense of belonging. She’s a self-starter with an innate curiosity, moral integrity and an acute sense of justice; all of which delivers her an instinct for solving crimes. With newfound wealth and The Adventuresses to hone her rough edges and become the family she’s never had, Peregrine is unstoppable.

Detective James Steed (Joel Jackson) is a smart, ambitious cop constantly hamstrung by the rigid leadership of his immoral boss but respectful of the hierarchy. Instantly attracted to Peregrine, he’s dazzled by her audacity and often drawn into her mad plans.

Despite consciously avoiding commitment to any man who might slow her down, Peregrine’s drawn to James’ moral fibre, downright decency and a kind of intellectual frisson she certainly never experienced with her old boyfriend, Eric (James Mason). James’ fighting spirit and dedication to justice makes them a mighty team - that is whenever they’re not competing with each other or disagreeing on things!

Catherine McClements is Birdie. With a mind like a steel trap, and ex-member of WW2 Special Forces, Birdie is the ‘M’ of The Adventuresses’ operation and club president. A tough woman of high expectations, she recognises the ’60s are changing and they need new blood – but having Peregrine under her wing is also a way of staying connected to the old friend she misses desperately.

Seven’s Head of Drama, Julie McGauran, said: “What’s not to love about this brilliant show. The fabulous cast were very quick to jump on board once they read the exceptional scripts filled with great characters and classic murder mystery twists and turns. This drama series is set to become a family favourite.”

“We are thrilled to be working with such a terrific ensemble cast lead by Geraldine and Joel. Geraldine was born to play a character from the ‘60s - she is a reincarnation of Audrey Hepburn! And Joel is fabulously dashing as Steed,” said Every Cloud’s Fiona Eagger and Deb Cox.

The series has been developed by Fiona Eagger, Deb Cox and Jo Martino and is based on the Phryne Fisher Mystery Books by Kerry Greenwood.