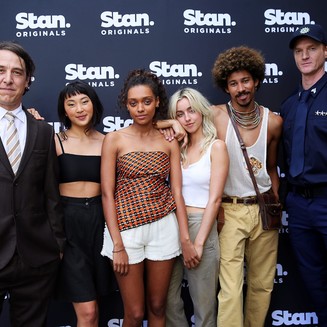 From the creators of Miss Fisher’s Murder Mysteries and Skins, the eight-part drama series is currently in production.

Stan has commissioned Eden, a brand new eight-part Stan Original Series which lays bare the dark and secret lives of a raft of characters in a place that looks very much like paradise. Inspired by the iconic beauty of the town of Byron Bay, the series is currently shooting in the Northern Rivers region of New South Wales with major production investment from Screen Australia.

Exploring the unseen lives of a collective of locals after the disappearance of a young woman, Eden was created by Australia’s own award-winning emerging writer-director Vanessa Gazy (Highway), who will serve as head writer and executive produce the series. The eight-part, one-hour drama has been developed in collaboration with Bryan Elsley and is based on an original concept by Deb Cox. Elsley, who founded the U.K.’s Balloon Entertainment with comedian Harry Enfield, previously worked with Every Cloud on the web series Deadlock. Fiona McConaghy (Stan Original Series The Gloaming) will produce the series.

Nick Forward, Chief Content Officer at Stan, said: “With the creative force of Fiona Eagger and Deb Cox working behind the scenes, in tandem with the U.K.’s formidable Bryan Elsley and our own rising star Vanessa Gazy, Eden promises to be an extraordinary original series.”

Sally Caplan, Head of Content at Screen Australia, said: “We were very impressed by the scripts from exciting new talent, creator Vanessa Gazy, teaming up with Bryan Elsley and Every Cloud Productions who have a track record of creating premium drama. The team have used a unique storytelling style to create a captivating mystery set against the distinctive Australian backdrop of Byron Bay, and I can’t wait to see it.”

Deb Cox, Every Cloud Productions, said: “It’s been wonderful working with Stan to build on our long-term experience of drawing stories from the region and to revisit our previous creative collaboration with Bryan Elsley.Introducing Vanessa’s fearless storytelling to that mix has created a series dramatically unlike any other previously seen on Australian television.”

Bryan Elsley, Balloon Entertainment, said: “What’s really exciting about Eden has been the discovery of such terrific writing talent in Australia. Our all-female writing team, led by Vanessa Gazy, have brought fresh and distinctive voices. Combining their talents with a knock-out cast will make for exhilarating television.”

Maartje Horchner, EVP Content, all3media, noted: “We are so pleased to see two of our celebrated producers working together with us on this fabulous series. We have been involved in Eden since it’s concept stage – and with Stan’s commitment it’s great to see a show going into production this year. The combined talents of Bryan Elsley’s team with Deb and Fiona at Every Cloud have secured great young talent in the cast of this character based mystery – and we are confident that this will be a destination series for leading platforms around the world.”

Grainne Brunsdon, Head of Screen NSW, said: “I’m thrilled the production of Eden will bring focus to the Northern Rivers region, using the breathtaking landscapes for on-screen locations, while also increasing local jobs and boosting the region’s economy. We look forward to tuning into Eden on Stan in the near future.”

Stan Original Series Eden is produced by Every Cloud Productions and Balloon Entertainment. Major production investment from Screen Australia in association with Screen NSW. Financed with support from all3media International who is the global distribution partner on the series.