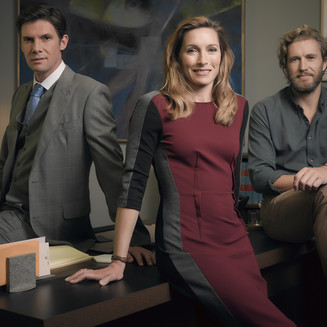 The series centres on Josephine Newton, a suburban solicitor with an over developed sense of responsibility who attempts to return to her glorious (albeit brieft) stint at the Bar.

When Josephine’s (Claudia Karvan) low-flying solicitors practice is incinerated by a disgruntled client, she is persuaded by her old uni friend and not-so-secret admirer, Lewis Hughes (Toby Schmitz) to trade the benefits of her brilliant mind for a berth in the lofty glamour of Knox Chambers. With her office destroyed, her marriage collapsing and motherhood fast losing its charm, Josephine decides it’s time to take her own aspirations off the back burner and resume her barrister’s robes.

Make sure to like the Newton's Law Facebook page to keep up with all the behind the scenes action and exclusives. And to get your first look at the show, watch the extended trailer here.