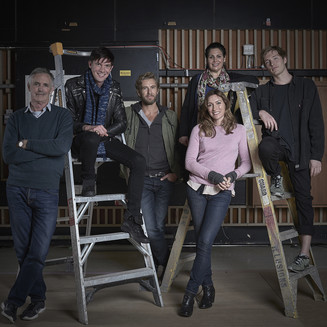 Every Cloud Productions and ABC TV are thrilled to announce that filming has started this week in Melbourne on the eight-part drama series Newton’s Law, which showcases an outstanding lineup of Australian talent.

Newton’s Law centers around Josephine Newton, a suburban solicitor with an over-developed sense of responsibility who attempts to return to her briefly glorious stint at the Bar.

When Josephine’s low-flying solicitor’s practice is incinerated by a disgruntled client, she is persuaded by her old uni’ friend and not-so-secret admirer, Lewis Hughes, to trade the benefits of her brilliant mind for a berth in the lofty glamour of Knox Chambers. With her office destroyed, her marriage collapsing and motherhood fast losing its charm, Josephine decides it’s time to take her own aspirations off the back burner and resume her barrister’s robes.

Newton’s Law is the brain child of Every Cloud Productions’ Deb Cox and Fiona Eagger, the team that bought Miss Fisher’s Murder Mysteries to the screen.

The series will film on location and in studio over the next 12 weeks and will screen on ABC next year.