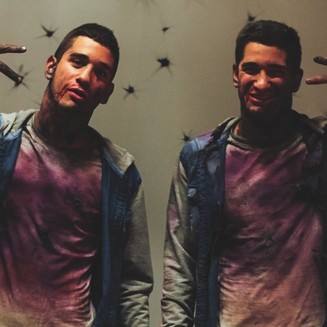 RackaRacka set to star in Deadlock

Starring YouTube sensations Michael Philippou and Danny Philippou (aka RackaRacka), and a stunning young cast including Luca Sardelis (Nowhere Boys) and Darcy McGrath (My Place) this exceptional new series has been created by Deb Cox and Fiona Eagger’s Every Cloud Productions and is written and directed by one of Australia’s most exciting emerging screen talents, Billie Pleffer.

DEADLOCK crashes though the incredible highs, joy, heartbreak, camaraderie, laughs and bittersweet sorrow of what it is to be a teenager.

The series’ unique development process saw young people from the Northern Rivers region - which traverses Byron Bay and Lismore - contribute their stories and ideas for the series in a workshop facilitated by Bryan Elsey, internationally acclaimed creator and co-writer of the UK teen series Skins. The series was then developed by Billie Pleffer from Deb Cox’s original concept.

The authentic voices of young regional Australia will be represented on screen by a cast that features exciting young talent from the Northern Rivers, including Bijou Gracie Henry, Audrey Spence, Paddy Swaine, Theodore Bourgoin, Sophia Wright and Ned Sacks.

DEADLOCK begins with a mysterious car crash that exposes the dark underbelly of an idyllic paradise, dramatically changing the lives of the teens it touches. Beating the universal anthem of youth, the story ignites their individual quests to assert who they are, what they want and the risks they take to get there.

Every Cloud’s Deb Cox and Fiona Eagger said: “Collaborating with younger creators has been such a rewarding experience and seems the way of the future for exciting, high-level content - and working regionally has unearthed a wealth of talent we’re proud to connect with the wider industry.”

Sally Riley, ABC Head of Scripted Production, said: “DEADLOCK embodies the ambition of our growing iview slate of scripted programming. Drawing together some of the most exciting young Australian talents both in front and behind the camera, this exciting short-form, digital series is helping to develop and nurture the next generation of screen stars.”

“We can’t wait to see what the combination of the hugely successful RackaRacka brothers and the skills and expertise of Miss Fisher’s Murder Mysteries creators Every Cloud Productions will deliver. The Philippou brothers are the most watched content creators in the country and we are confident DEADLOCK will set a new bar for exciting cross-platform creative collaborations,” said Screen Australia’s CEO Graeme Mason.

Create NSW CEO Michael Brealey said: “DEADLOCK is the latest screen production to emerge from the creative hub that is the Northern Rivers. With many of the cast and crew from the local area, the series is a brilliant opportunity to showcase the depth of talent in the Northern Rivers and to tell a compelling and vivid regional story that will resonate with younger audiences regardless of where they live.”

“Congratulations to Every Cloud Productions for developing and financing this exciting new online series, driven by an all-female team. Fiona and Deb have seized a unique opportunity which will develop new talent, including Victorian Writer and Director Billie Pleffer. We’re sure Deadlock will deliver an authentic and exciting viewing experience that will resonate with younger Australian and international audiences,” said Jenni Tosi, Film Victoria CEO.

DEADLOCK is a 5 x 12-minute web series which will screen on ABC iview later this year. A one-hour format of the show will also be produced.