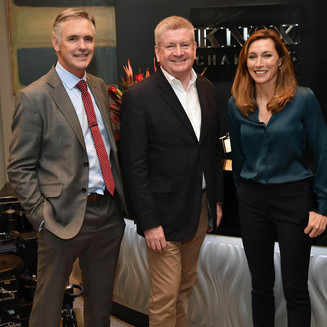 This week Senator Mitch Fifield, Federal Minister for the Arts & Communications, and his Senior Arts Advisor Denise Ryan visited the ABC set of our new drama series Newton's Law. Joined by Screen Australia CEO Graeme Mason, COO Fiona Cameron and new Screen Australia board member Richard King, they got a behind the scenes look at the production and met cast and crew including lead actress Claudia Karvan. Newton's Law has been shooting in Melbourne for the last three months with filming due to wrap in two weeks.

The series is scheduled to be released in 2017, and is a feature of ABC's TV slate for next year which was also launched this week. Inside Film reported earlier this week that Newton's Law was the highest-profile new program on ABC's new drama slate, with Richard Finlayson, Head of ABC TV, describing the eight-part series as "really broad and light and funny. She’s a flawed, vulnerable character, like a number of the heroines we’re seeing on air at the moment. I think it’s going to work really well". We can't wait to share more of this series with you in the coming months.