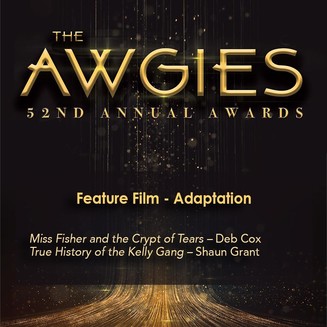 Every Cloud's Co-Founder & Creative Director, Deb Cox has been nominated in the 2019 Australian Writers' Guild Awards for her brilliant work on the Miss Fisher feature film Miss Fisher & the Crypt of Tears, set for theatrical release in 2020.

Congratulations on your nomination Deb and good luck to all the nominees!

Awards will be presented across 18 individual categories including feature film, television, documentary, theatre, audio, animation and interactive media. Individual category winners will be eligible for the Major Award, given to the most outstanding script of the year.

AWGIE recipients will be announced at the 52nd Annual AWGIE Awards on Thursday 22 August 2019 at the City Recital Hall, Sydney.

Since 1968 the Australian Writers’ Guild has presented the AWGIE Awards to recognise and reward the talents, triumphs and unique contributions of Australian screen and stage writers to the Australian arts. The AWGIE Awards are the only writers’ awards judged solely by writers, based on the written script – the writer’s intention rather than the finished product.

Find the full list of nominees for the 52nd Annual AWGIE Awards here.