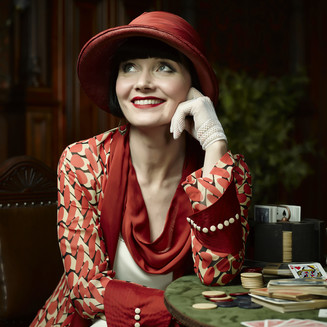 Essie Davis goes for Gold at the TV Week Logies

Essie Davis has received 3 Logie nominations at this year’s TV Week Logie Awards. Essie picked up noms for Most Outstanding Actress, Best Actress and Best Personality on TV – the coveted Gold Logie – for her role in Miss Fisher’s Murder Mysteries.

The only actor in the mix of TV presenters, Essie is up against former Gold Logie winners Carrie Bickmore and Scott Cam, as well as SBS newsreader Lee Lin Chin, The Project’s Waleed Aly, Family Feud’s Grant Denyer. Essie’s nomination for the Gold Logie is a testament to the phenomenal fan base and cult status the series has acquired over its three seasons. Sold to over 160 territories internationally and now a hit on Netflix in the USA, Miss Fisher’s popularity continues to grow.

Season 3 of the series was a hit for broadcaster ABC TV, with an average weekly audience of 1.4 million viewers over the 8 episode run. ABC TV received a record thirty-three nominations for this year’s Logie Awards - the most of any network. ABC Director of Television Richard Finlayson spoke to Inside Film about the network’s nominations: "Our TV and News teams are thrilled by this record haul of nominations, across so many genres and demographics…We’re committed to being the home of Australian stories and I want to congratulate all our staff and the brilliant actors and production partners who bring ABC TV to life.”

The 58th TV Week Logie Awards will be presented in a grand ceremony on May 8 at the Palladium Room, Crown Casio in Melbourne.