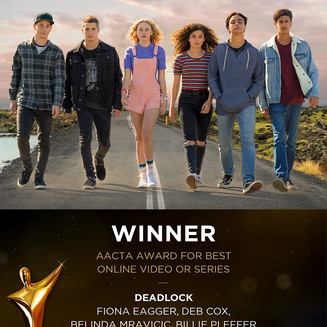 EVERY CLOUD WINS AN AACTA AWARD FOR DEADLOCK

Every Cloud Productions have recieved an AACTA award for our short form series Deadlock at the 2018 AACTA Awards Industry Luncheon presented by Foxtel.

Celebrating both the 60th Anniversary of AFI | AACTA – Australia’s longest standing national screen culture and industry development organisation – and the nation’s top achievements from the past year, 35 Awards were presented during the Luncheon, recognising screen craft excellence across all industry sectors.

Every Cloud's Fiona Eagger and Deb Cox, along with producer Belinda Mravicic and director Billie Pleffer took home the AACTA Award for Best Online Video or Series for the high octane series.

Deadlock explores the incredible highs, lows, joys, heartbreak, camaraderie, laughs and bittersweet sorrow that make up a teenager’s life. A clandestine ‘tunnel party’ in the depths of the hinterland in northern NSW draws kids from all over the area but when a spectacular stunt leads to a car crash, a group of five teens face events that will transform their lives and their idyllic landscape forever.