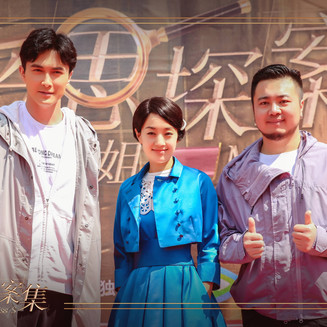 Production has begun in China this month on the Mandarin language version of the Miss Fisher Murder Mysteries television series, the international hit series created for television by Every Cloud Productions.

The Shanghai 99 Visual Company will produce 30 x 42 minute episodes, having acquired the Chinese format rights, and they will be shown on Tencent Network in the spring of 2020.

The Shanghai 99 Visual Company has partnered with Tencent Penguin Film, attached to the biggest television network in China, and Easy Entertainment, one of China’s top artist management companies.

This is the first Australian television series to have been re-versioned in China.

The series is set in 1930s Shanghai, at the time one of the most vibrant and fashionable cities, where foreigners and Chinese alike enjoyed its many hedonistic pleasures.

Starring as the eponymous, glamorous lady detective is influential Chinese actress Yili Ma, awarded best actress at the 2017 Shanghai Television Festival and well known for her television and film roles and as a producer.  Jin Weiyi is the head writer and one of the producers.

Miss Fisher’s Murder Mysteries, produced by Deb Cox and Fiona Eagger’s Every Cloud Productions,has become one of Australia’s most successful television brands, both at home in Australia and internationally.   Series 1 premiered on ABC TV in February 2012 and was an instant hit, garnering an average of more than 1.1 million viewers per episode.  Since then, the series has sold to an unprecedented 247 territories in 179 countries and has amassed a fan base in the millions worldwide. Broadcasters include Netflix (multi-territory deal), Acorn (US), Channel 5 (UK), UKTV’s Alibi Channel (UK), France3 (France), Knowledge Network (Canada), Kanal 5 (Sweden), PBS (USA), Sony Germany and Red Bull Media House (Germany) and Rai (Italy).  Its debut in France captured an audience of 3.28 million.

“It’s such a thrill to be on set in China for the first week of production and to see Miss Fisher incarnated in the fabulous setting of 1930s Shanghai.  The cast and crew here are wonderful custodians of the Miss Fisher brand and we look forward to a continuing successful relationship with Shanghai 99,” Fiona Eagger and Deb Cox said.

The series is based on Kerry Greenwood’s Phryne Fisher mystery series of books, which are best sellers around the world.

Miss Fisher and the Crypt of Tears will be released in Australia by Roadshow Films and in the US by Acorn.  Ms Fisher’s Modern Murder Mysteries, a series of four telemovies, has just screened on the Seven Network in Australia, garnering an audience of 770,000 per episode and ranking in the Top 5 Drama programs for 2019 to date.  The international distributor of the series and the film, All3 Media International, is thrilled to announce that Ms Fisher’s Modern Murder Mysteries, will be broadcast on Acorn in the US and UKTV in the UK later this month.