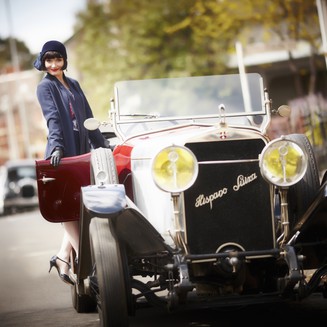 Our international distributor, All3 Media International, has also notched up new deals with Netflix USA, Canal Plus Poland, HRT Croatia and Viasat for Estonia, Latvian and Lithuania – as well as a clutch of deals with local broadcasters in Hungary, Ukraine, Azerbaijan, Georgia, Russia and Turkmenistan.

Commenting on the deal, Steve Hornsey, General Manager for Alibi:

“We’re delighted to welcome Phryne Fisher (the protagonist in MISS FISHER’S MURDER MYSTERIES) to alibi and continue our relationship with ALL3MEDIA International.  As TV’s home of crime drama we showcase the very best selection in the genre from around the world, and we’re sure this hit Australian series will be an exciting new addition to our audience’s favourite titles.”

Alex Findley (Head of Acquisitions and Co-Productions) concluded the deal with Liza Thompson of ALL3MEDIA International who added;

‘I am delighted to conclude a deal in the UK with Alibi Channel  for this opulent and glamorous strong female detective 13 part series set in the 1920s, starring Essie Davies and Miriam Margoyles”

Previously the series, which was launched at MIPTV 2012 had sold to Globosat, Knowledge Canada, DR Denmark, Kanal 5 Sweden and Acorn DVD for USA.

Canadian viewers will get to see Phryne on the small screen as of next week, with the Knowledge Network airing the series from Friday October 5th at 8:30pm.