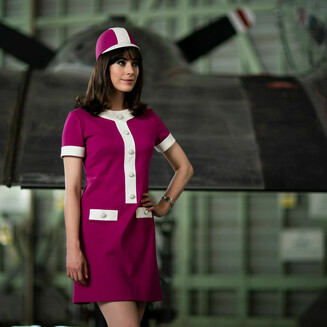 As part of the 2021 Melbourne Fashion Week, we invite you to attend the Ms Fisher's Modern Murder Mysteries Exhibition. Jet yourself back to the swinging 60's with a costume exhibition showcasing the fashion, hair and make up and production design from the hit television series Ms Fisher’s Modern Murder Mysteries. Visitors will get access to the behind-the-scenes world of TV making, and what goes into recreating the iconic fashion, hair and make up from the period. The Exhibition will feature over a dozen costumes designed by Penny Dickinson.

Meet the Makers Q&A + Screening at The Capitol

The Capitol, RMIT School of Media and Communication and Every Cloud Productions will also host a special event-screening and in-conversation about how the Miss Fisher universe was created and how you develop a franchise as successful as the phenomenal spin-off series, Ms Fisher’s Modern Murder Mysteries.

The evening will commence with a screening of Ms Fisher’s Modern Murder Mysteries Season 2, Episode 1 and an exclusive “Making of” featurette with the show’s Heads of Departments, covering costume design, hair & make up and production design.

The conversation will explore what goes on below-the-line and behind-the-scenes and dissect how various areas of expertise such as costume design, hair and make-up, location scouting, producing and licensing - work collaboratively to create the world of Ms Fisher. We'll also look at how the authenticity of the series was enriched and inspired by Melbourne's wonderful period architecture.

Miss Fisher fans will be out in force for this event but the behind-the-scenes insights from the screening and exhibition will offer general audience appeal. Individuals who are drawn to a screen career will have an opportunity to gain a perspective on how creatives and crew work together to achieve the vision of the show.