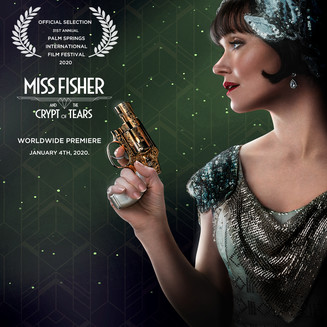 Miss Fisher and the Crypt of Tears to have its World Premiere at the Palm Springs International Film Festival!

Miss Fisher & the Crypt of Tears, the feature film based on the international hit television series and best-selling murder mystery books, will have its world premiere at the Palm Springs International Film Festival in the US on January 4.

Following its world premiere at Palm Springs, one of the most influential film festivals in the US, Roadshow Films will release the film in Australia on February 27 and it will make its US Premiere in select theatres and on streaming service Acorn TV in March 2020.

Filmed on location in Melbourne, Australia, and in Morocco, Essie Davis (Lambs of God, True History of the Kelly Gang, Game of Thrones) returns in the eponymous lead role as the glamorous private detective, The Honourable Miss Phryne Fisher, whose exploits in 1920s Melbourne, Australia, lead her to murder, mystery and mayhem from London to British Palestine.

From a screenplay by Deb Cox, Miss Fisher & The Crypt of Tears is directed by Tony Tilse. who was the set-up director on the television series Miss Fisher’s Murder Mysteries. Tony has built a formidable international reputation for work such as Serangoon Road and Grace (HBO Asia), Wolf Creek, multiple episodes of Ash vs Evil Dead for producer Sam Raimi and Chosen for Playmaker / China’s iQiyi.

The film is produced by Fiona Eagger, with Every Cloud’s Eagger and Cox also acting as executive producers. Lucy Maclaren is co-producer.

“We are absolutely thrilled to premiere Miss Fisher & the Crypt of Tears in Palm Springs and to have the film launched internationally at such a highly regarded event.  Miss Fisher has a huge fan base in the US and they are clamouring to see her on the big screen as are her legions of Australian fans,” said Fiona Eagger and Deb Cox.

Private investors and fans contributed more than $AUS 1 million to the budget for Miss Fisher & The Crypt of Tears through an extraordinarily successful crowd funding campaign.

The film opens with the Hon. Miss Phryne Fisher rescuing Shirin Abbas, a young Bedouin woman, who has been thrown into jail in British Mandated Palestine, for making trouble at a time of colonial unrest. After a perilous escape from Jerusalem, she rejoins Shirin as a fellow guest in the home of Lord and Lady Lofthouse, for the London ‘season’ and she pledges to help her right a wrong and discover the truth about the Crypt of Tears - an ancient crypt rumoured to lie somewhere beneath the rolling sands of the Negev Desert.

Production credit: Miss Fisher and the Crypt of Tears is an Every Cloud Productions feature with principal production investment from Screen Australia in association with Film Victoria. Roadshow Films will distribute in Australia and New Zealand, and all3media will handle international sales.