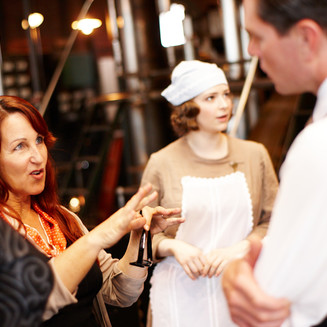 Interview with Deb Cox about the development process of Every Cloud's new series DEADLOCK and how it was born out of a true life tragedy.

Q: Where did the concept of Deadlock come from?
Deb Cox: There was a serious accident up in the Northern Rivers, on the sweeping coast road less than a mile from where I live. A seventeen-year-old boy was the only survivor when four of his mates died. My kids were the same age so I heard about the ripples running through the region with the wash up of that and became preoccupied by the almost subterranean life of the youth of the area - especially those living in the coastal ‘paradise’ around Byron Bay.

Q: …But it’s not based on that experience is it?
DC: DEADLOCK isn’t based on any true story but that accident was the trigger because it affected me so deeply and made me ponder the contemporary challenges of growing up in ‘paradise’ and find a way to give those young people a voice.

Since then DEADLOCK has morphed, becoming part of Every Cloud's slate, with Fiona Eagger helping to mastermind how we could realise it and wonderful creative collaborators coming on board - both experienced and youthful. I’m so excited to see how it’s going to evolve through the production process.

Q: What was the development process for this show?
DC: It has been incredibly comprehensive and broad - which is why we have a wealth of stories to tell after this first instalment! We called out for young writer/directors from around Australia to apply to be part of the evolution of DEADLOCK - whittled this down to six smart creatives who hailed from all over Australia and then put together an intensive Script Lab Workshop to bring them all together with the kind of support we felt would enrich the process.

Q: And Bryan Elsley - co-creator of UK series Skins – came on board as part of the Workshop…sort of as a mentor role to guide the process?
DC: Having Bryan Elsley come out from the UK to spearhead our DEADLOCK workshop in Byron Bay was the highlight of the development process for Fiona and myself! He was top of our wish-list and we were so thrilled he agreed (luckily he has an Australian wife and loves the change of climate).

With ‘Skins’ running to 7 series and circulating on various international platforms, the series still has great currency with youth internationally and all our participants were excited to have him join us. We took advice from Bryan and gathered a ‘brains trust’ of local teenagers as part of the Workshop, so our research was absolutely up-to-date, added Australian multiplatform story guru, Mike Jones, and indigenous consultant, Jon Bell.

It was impressive to witness how Bryan elicited intimate stories from everyone, fed them into a character/scene and story creation process and helped us find a dynamic strong enough to drive the world of DEADLOCK.

Q: The series is being shot in the Northern Rivers region of NSW, how important is reflecting regional voices in screen content?
DC: It’s crucial that regional voices are reflected on our myriad of screens and even more important that regional YOUTHFUL voices are reflected. We so often hear about youth feeling disenfranchised and overlooked but in regional areas, where youth often miss out on basic facilities, access to culturally enriching experiences and face the added challenges of having to leave home to study, find employment or just find their way in the world, it’s even more important that their lives become known, shared and understood through screen content.

And, surprisingly, unique local stories often travel the world the best.  When Bryan Elsley first read the concept document for Deadlock he was the one who helped us understand that a tale of regional youth coming of age in ‘paradise’ was a story worth telling far more widely than we at first envisaged.  Global audiences are hungry to engage with worlds that are simultaneously exotic and strange to them, but also connect them emotionally across the planet. So, we’re hopeful that DEADLOCK can resonate widely - in spite of and because of it’s particularity!

Q: You’ve created a lot of seminal Australian content – SeaChange, Miss Fisher’s Murder Mysteries – what’s unique about Deadlock?
DC: DEADLOCK is a very different project for me because I only began the conversation and dug down into the concept with research and development, but I really needed to pass it on to youthful creatives who could own it and reflect their world authentically.

It’s also a unique project for Every Cloud Productions, because it’s far more about mentoring and facilitating key creatives -  like our Writer/Director for season one, Billie Pleffer.  It’s also our first foray into online drama as a primary focus aimed at reaching an entirely different audience  - though we will also broadcast this first hour and obviously our other projects are distributed widely and internationally on platforms like Netflix.