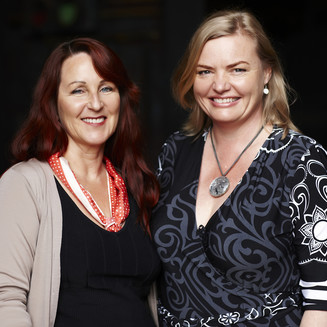 In 2007, producer Fiona Eagger faced a fork in the road. Enjoying a successful run as a TV producer after shifting from film and poised to start work on groundbreaking crime noir series, Underbelly, Deb Cox approached her with a proposition.

Cox, enjoying a triumphant ride after Sea Change, was developing a new series based in Byron Bay called East of Everything – she knew Eagger was the perfect partner for it. The choice, between filming in the gritty backstreets of Melbourne or the ambrosial haven of Byron Bay was not just one of lifestyle, it would mark the start of one of Australia’s most successful TV production alliances - Every Cloud Productions.

Byron naturally won and Every Cloud was born which in turn has nurtured the Northern Rivers' screen industry and developed a production house that continues to excel in exporting local content globally.

The two series of East Of Everything created over 600 jobs and infused $3.65 million into the region. Ten years on and a few career affirming moments like mortgaging the family home to finance a project, Eagger has no doubt that this is her life’s calling.

“We still invest in our own shows. You need to be inherently entrepreneurial. To create shows that are going
to travel and sell, it needs to be treated like a business -  it is not all about handouts.”

Every Cloud’s Miss Fisher’s Murder Mysteries, is the dream aspirational outcome for local content production. Distributed by All3 Media, the series has aired in over 172 markets and has been sold to channels including PBS, Netflix, Channel 5, Rai1, TVNorge and Viasat.

Eagger advises that producers need to be acutely aware of the global market demands and whims. “You need to know what sells, you need to have ongoing dialogue with distributors and work out the synchronicity between the international and domestic markets”. The success of Miss Fisher was a confluence of beguiling lead character and narratives supported by a well-established demand for the crime genre globally. She also does not underestimate the power of the producer’s creative vision. “During my early career in film I realised the importance of a producer’s contribution to shaping a project. I like the control of being the producer – the producer sees the opportunity, they finance it, make it and launch it. The onus is on you to make sure you deliver what you are selling,” she states.

Having skin in the game also allows the project and its producers to take more ambitious and less travelled routes. The mooted film version of Miss Fisher secured initial financing through crowdsourcing and Every Cloud’s Commercial Director Drew Grove was instrumental in the IP extensions for Miss Fisher including the National Trust’s costume exhibition.

In 2018, Every Cloud is focused on developing relationships with international companies and a deeper understanding of the Asian market. “In the next 3-5 years, we are forecasting more in-development work with broadcasters and engaging with international markets with co-production activity.”