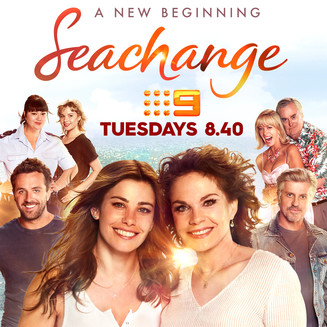 SEACHANGE LAUNCHES AS THE NUMBER ONE DRAMA IN AUSTRALIA

Every Cloud Productions and ITV Studios Australia are celebrating the premiere of Seachange, the highest rating drama on Australian television in 2019.

The opening episode of the series – a reboot of the much loved original Seachange - dominated its timeslot on the Nine Network, with the highest number of viewers of any show in the five major metropolitan markets, Sydney, Melbourne, Brisbane, Adelaide and Perth. It was the number one show across the entire night in Melbourne and the dominant timeslot winner across the country with people aged 25-54.

Seachange is an Every Cloud Productions and ITV Studios Australia collaborative production – the first for this partnership - for the Nine Network, with major production investment from Screen Australia and financed with support from Create NSW. It is distributed internationally by ITV Studios Global Entertainment. Original co-creator and head writer, Deb Cox, is executive producer alongside Sigrid Thornton, Every Cloud’s Fiona Eagger, ITV Studio’s David Mott and Nine’s Andy Ryan and Jo Rooney. Lois Randall is producer with Wayne Blair as set up director.

“We’re thrilled that audiences have embraced our beautiful show and the spirit that carries through from the original series.  Fiona and I would like to thank our fabulous cast, headed by the inimitable Sigrid Thornton, our hardworking crew and the people of the Northern Rivers region of NSW who embraced the show and made our cast and crew so welcome,” said series creator, Every Cloud’s Deb Cox.

"What a fabulous ratings result,” adds Producing partner, Fiona Eagger. “And all without cooking, singing, getting married or building a house!”

David Mott, CEO and Managing Director of ITV Studios, said: “What a pleasure it’s been working alongside Every Cloud with Fiona, Deb and Sigrid! It has been a delight to have had the opportunity of bringing back to life one of Australia’s much loved scripted dramas that is quintessentially Australian. The ratings results are a testament of the hours spent by cast and crew and we know these overnight ratings will only cumulate higher with the various platforms Seachange will be viewed in today’s media landscape.”