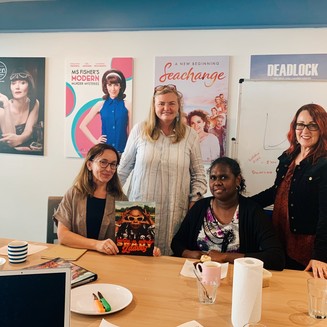 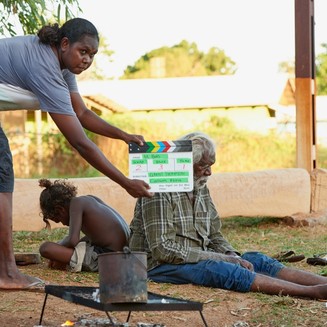 Every Cloud Mentorship: SPA's Ones To Watch Program with Courtney Collins

Courtney Collins is a writer and producer currently living in the remote Indigenous community of Ngukurr in South East Arnhem Land and Katherine, NT. Part of this year's SPA's 'Ones to Watch Program' Courtney is being mentored by Deb Cox and Fiona Eagger.

In 2017 Courtney started Ngukurr Story Projects to support local Indigenous people to tell the stories they want to tell in the language they want to tell it in. To date, she has produced 10 shorts with local people in Ngukurr, including Lil Bois, written and directed by Ngandi man Grant Thompson which screened on NITV, was nominated for Best Short in the 2018 Capricornia Film Awards and toured with Flickerfest.

This year she will deliver Bird –  her first YA novel,  a fantastical whodunnit set in 17th Century Tibet and modern day Darwin.

Courtney’s first novel, The Burial, was shortlisted for numerous prizes including the NSW Premier’s Award and The Stella Prize. It was named by the US Independent Booksellers Association as an ‘Indie pick’ and a Booklist ‘Book of the Year’. It has now been sold in ten countries. With Courtney in the role of script advisor it is in development as a feature film directed by Jasmin Tarasin and supported by Screen Australia.As a writer and producer Courtney is committed to creating and co-creating stories led by women and Indigenous people on the page and on the screen.