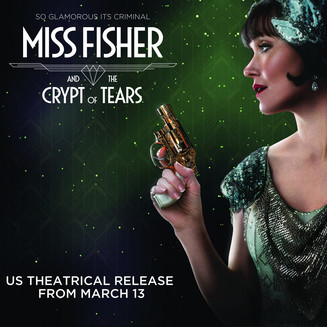 US Theatrical Release for Miss Fisher & The Crypt of Tears

Every Cloud Productions’ Miss Fisher and the Crypt of Tears will be released theatrically in the US beginning Friday, March 13 by AMC Networks’ streaming service Acorn TV. The film will have limited engagements into a minimum of 40 cinemas across the country, including locations in New York, Los Angeles, Dallas, Chicago, Seattle, Miami, Denver and San Francisco. The release starts on the 13th of March with select screenings extending into April. For screening locations/dates, please visit https://missfishermovie.com/

The film will be available on Acorn TV’s streaming platform from Monday, March 23.

Acorn TV sees the theatrical run of the film working in tandem with the release on its streaming platform.  Matt Graham, Acorn TV’s General Manager said, “Since Acorn TV premiered Miss Fisher in the U.S. in 2013, the passionate fan base has rapidly grown each year in the U.S., so we’re thrilled to offer them a theatrical experience to get together and enjoy the gorgeous and cinematic Miss Fisher & the Crypt of Tears.”

“With a substantial and enthusiastic fan base in the US who have followed our leading lady’s adventures across the three original television series of Miss Fisher’s Murder Mysteries, tickets are selling like hot cakes and Acorn TV is very encouraged by these early sales,” says the film’s Executive Producer and Producer, Every Cloud’s Fiona Eagger.

Every Cloud and Acorn TV are hosting super fan receptions in key locations, including Los Angeles and New York (in partnership with the Australian Screen Forum in New York and Australians in Film in Los Angeles) following the success of the film’s US launch in January at the Palm Springs Film Festival, where hundreds of Miss Fisher fans from across the US travelled to attend three sold-out screenings in fabulous 1920s fancy dress. All three seasons of Miss Fisher’s Murder Mysteries are available to stream exclusively on Acorn TV.

Miss Fisher and the Crypt of Tears opened in Australia last week and has hit a strong box office total of $2.3m as of Monday March 9.

The film will also screen at the Helsinki Film Festival later this month and its UK TV debut in April will follow an event cinema launch at the Curzon Soho cinema.

The Costume exhibition on the “World of Miss Fisher” starts at the National Trust – Rippon Lea estate Melbourne from the 20th of March 2020.