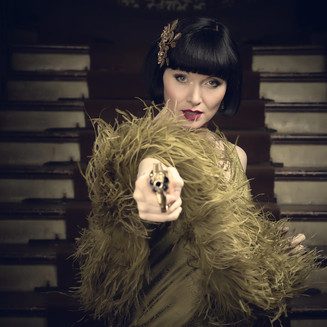 Video Game Debut with Miss Fisher and the Deathly Maze

The Honourable Miss Phryne Fisher will make her video game debut next year when Miss Fisher and the Deathly Maze, a chooseable-path adventure and visual novel, comes to iOS and Android smart phones and tablets, as well as PC and Mac.

Miss Fisher and the Deathly Maze will take its cues from the television drama series, which is based on the novels by Kerry Greenwood. To bring this digital adventure to life Every Cloud Productions has teamed up with Tin Man Games, purveyors of digital gamebooks and interactive fiction, who have developed over thirty rip-roaring adventures on a number of platforms.

Becoming the independent, feminist super-sleuth, players will guide the heroine on a modish dance of adventure, murderous mayhem and mystery around the world. Armed with her golden gun and with her companion, Dot Williams, in tow, the pair chase the trail of the insidious Murdoch Foyle. Foyle has escaped the gallows once again, with Phryne on his trail. Can Miss Fisher and Dot decipher his clues and stay on his trail? Or will they be tricked into pursuing a false lead, causing the trail to run cold? The player’s wit and ingenuity will help our heroes crack the case!

Tin Man Games has hired writer and game designer, Luke Miller, best known for his point-and-click adventure, My Ex-Boyfriend the Space Tyrant, to bring the world of Phryne Fisher to life and weave a compelling interactive narrative that will capture the imaginations of Miss Fisher fans and adventure gamers alike.

“Miss Fisher's Murder Mysteries has a legion of fans all around the world and this brilliantly conceived game will give them another opportunity to interact with their favourite lady detective. We are thrilled with the work Tin Man Games is doing to create such a fabulous video game, targeted at a thinking women’s audience,” said Every Cloud Productions’ Fiona Eagger and Deb Cox.

Miss Fisher’s Murder Mysteries is an Every Cloud Production, produced with the assistance of the Australian Broadcasting Corporation and in association with Film Victoria and Fulcrum Media Finance.